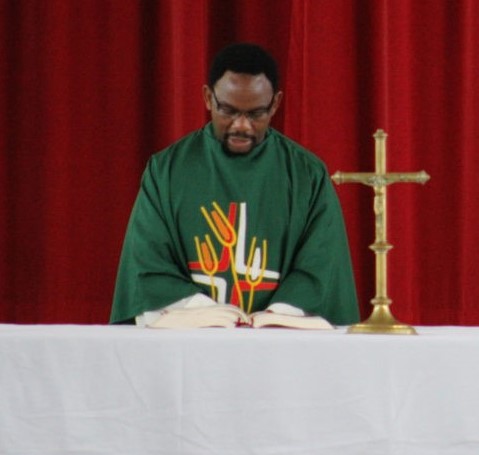 Fr Joseph Arimoso SJ presides at a school Mass in the Jubilee Hall.

Fr Joe Arimoso joined the Society of Jesus in 1992 soon after high school. He did his first stage of formation (novitiate) in Lusaka. After the two years he was sent to be one of the pioneers at Arrupe College in Harare. The four years for the BA in Philosophy were completed successfully and he was sent to teach at St Paul’s Musami for two years. After this regency, he was accepted to do his BA in Theology at Hekima College, in Nairobi in 2000. He came back to Zimbabwe and was ordained in 2003.
He was then assigned to do his pastoral work as Makumbi mission where he spent two years before he was sent for further studies in education at Roehampton University in London. On completing his MA in Education, he was sent to Ghana for the last stage of Jesuit formation called tertianship.
In 2007 he was missioned to teach at St George’s College but after serving for only one and half years, he was appointed as assistant to the Provincial and had to move to Garnet house, the Provincial offices. After five years at the Jesuit headquarters, he returned as the new Rector of St George’s College in January 2014. Fr. Joe is also the Education Delegate for all the Jesuit schools in Zimbabwe. In 2013 he was appointed as the Education Secretary for the region of Africa. These roles mean that as Rector he does a fair amount of time away from the school. Besides his love for football, Fr Joe is a writer, a poet and an artist.