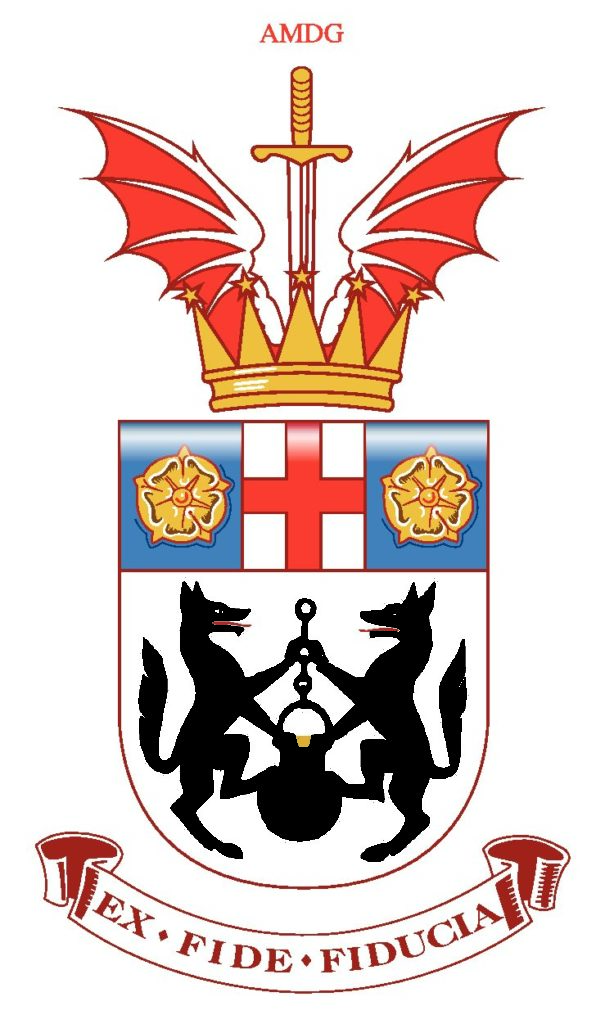 The pictured crest is used right across the school from the Paul Miki Centre, the infants’ department through Hartmann House, the junior school to St. George’s College, the secondary school. The Grant of Arms was made by the Royal College of Heralds on 19th October 1931 and aimed to recognise three outstanding characteristics:
1.    The first denoted the foundation and management of the College by the Jesuits, signified by the inclusion of two black wolves and the cauldron, as taken from the family arms of the Loyo¬la Family. St. Ignatius of Loyola was the founder of the Society of the Jesus or the Jesuit Fathers, and in Basque “loy” means wolf and “olla” means cauldron.
2.    The second characteristic, that of the location of the College in the then-Rhodesia and a play on the Greek word rhodon, meaning rose, is the symbol of an attractive flower that exists in many different forms, colours and perfumes. It is hardy and can flourish almost anywhere precisely because it is a hybrid of so many varieties. (These should be the qualities of a St George’s/Hartmann House pupil).
3   The third characteristic is the dedication of Hartmann House to the School’s patron, St. George, as depicted by the inclusion of the Red Cross from his banner and the hilt of the sword facing upwards.  This symbolises the Saint’s triumph and incidentally that of Christianity, over the powers of evil (as represented by the dragon’s wings) and humanity’s redemption through the death of Jesus Christ.
The motto on the scroll reads, “Ex Fide Fiducia” which is Latin for “From Faith Comes Confidence”.